IT is pleased to announce that audiovisual (AV) systems in the conference rooms have been upgraded from the nearly 8-year old, standard definition system to a high definition system. The new features of the system are: 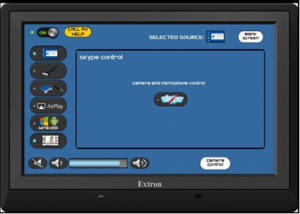 The new system is running at full high definition (1920×1080) resolution with all sources (resident PC, laptops, wireless projection, and videoconferencing) configured to use high definition. Further, the new projectors and flat panel screens produce a much brighter image than the older system.

The videoconference capable conference rooms (1021, 1066, 1106, 2069, 2115, and 2222) also support Skype, Hangouts, or other video chat software on the resident PC. You can login to the resident PC, launch Skype (or other similar software), and use the camera and microphone in the room with Skype. In the past, we had setup special skype sessions upon request. Going forward, please use the conference room’s capabilities with your own account and there is no need to make any special arrangements or requests for Skype sessions.

We will schedule a meeting with every department in the coming week to go over the use of the new system. The user interface is a shrunk down version of the touch panel user interface used in the classrooms. So it should be easier to use the other system if one is familiar with one system.